Change can be scary at times. Either they come completely unexpected. Or they do not correspond 100% to
what we imagined. And yet: without changes, life would be very boring.

Here are the chords played by the rhythm guitar:

You can see why it is called creepy changes because you encounter major and minor versions of the same chord appearing together,
which isn’t normally allowed in diatonic environments.

Prelude the start, this should be old hat by now, but it always works.
My motif is syncopated to make it more interesting since I only play the chord notes of F# major (F#, A#, and C#) in the first bar.

In the second bar I play around the C# (root of C# major) with the big ninth D#, but keep the ball rather flat.

In bar 3 we have to be a bit careful, because now the base chord is C# minor and therefore, we only bend a semitone
from D# to E (third of C# minor).

Stylistically confident, we land on the fundamental B major note.

Our motif is not yet finished, the second part is relatively simple: We play a little bit around the root of B minor,
then go to A# (third of F# major) and then to G#.

The D# is the fifth G# major and with a casual bending, we go back to the G# again to precede the fifth of C# major, so to speak.

As we have seen many times before, it makes sense to repeat the motif an octave higher on the second pass.
In bar 11, we then have a nice trill, which I improvised quite freely, hence the comic notation with 11 “sixteenths” over 2 quarters, felt just right.

The motif from bar 4 is repeated, but the final is an octave higher, to add a little more tension. 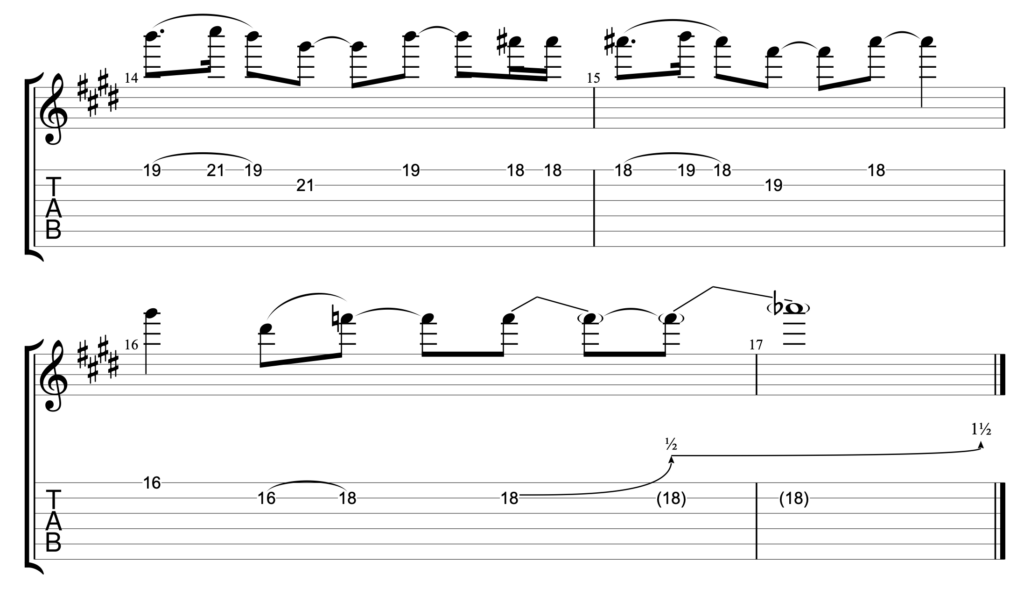 The final is a staggered bending from E# (major sixth), through the minor seventh (F#) to G#.
You first bend a semitone and then a whole tone. Bam!