When you dig to deep in your nose, it might get bloody

The chords are Em, D and C. So, we are dealing with the key G major or E minor.

Let’s start by building a motif. Our motif starts on the 3 of the first bar and goes to the 2 of the next bar (green circle).

Our motif becomes rhythmically interesting through the syncopations.

The motif is repeated four times, but the second time I only change the last two strokes.

The third time I move one string up, the fourth time also up to the 17th fret. So, we increase tension by moving the motif over the fretboard.

We can build up even more tension if we play rhythmically denser. That’s why I also add the semiquaver triplets in bar 5.

In bar 6 I play the original motif from bar 1 again, but now on the G and D strings.

This changes the sound because the lower strings sound a bit muffled, and also the pinch harmonics have a different sound.

In bar 7 I create some attention with a small string skipping concept before we move on to the target tone E with relaxed eighth-note triplets (bending from the 22nd fret).

Standing at a crossroad in life, our hero might chose the path to the dark side of chocolate.

Don’t choke on it. The first bar got it all figured out. Melody Tapping Deluxe.
So, here’s what we’re going to do: We take a normal E minor arpeggio (green) and tap it with the melody (red).

If this is too fast for you, here is the melody again, one by one:

There is one more special feature. The last note in the bar is an F sharp instead of a G. This is due to some mechanical reasons.

The next arpeggio in bar 2 is a C major arpeggio where the 15th fret is tapped, so I have to make room for this.

What can I say? I pull the same boot in bars two and three.

The arpeggios are C major and B minor. In bar four, I finish the phrase with a relaxed quarter triplet run.

That’s a cool topic. I just have to repeat it.
That’s why there’s nothing new in bars 5 to 7.

The triplet run in bar 8 has a few other notes, but that’s just it.

Now things are getting a little more exciting again.

The following bars could be summarized as “call and response”.
In bar 9 I call and in bar 10 I answer one octave higher (response) with a similar motif.
I repeat this in bar 11 and finish with a slightly different phrase in bar 12.

The last part is not for introverts: here you have to get out of your shell, as Attila Dorn from Powerwolf would say.

A little shredding part in E minor. The interesting thing about it is that we loosen up the run a bit by grouping 6 notes each.

This leads to accent shifts which is good against scale boredom.

Since our basic tempo of almost 160 BPM is already quite sporty, we need a solid picking technique for this part.

I tried to work with Economy Picking here.

Economy Picking is a mixture of Alternate and Sweep Picking.

For the remastered track I’ve created a second voice in the solo for Beyond the Veil. Here we go! 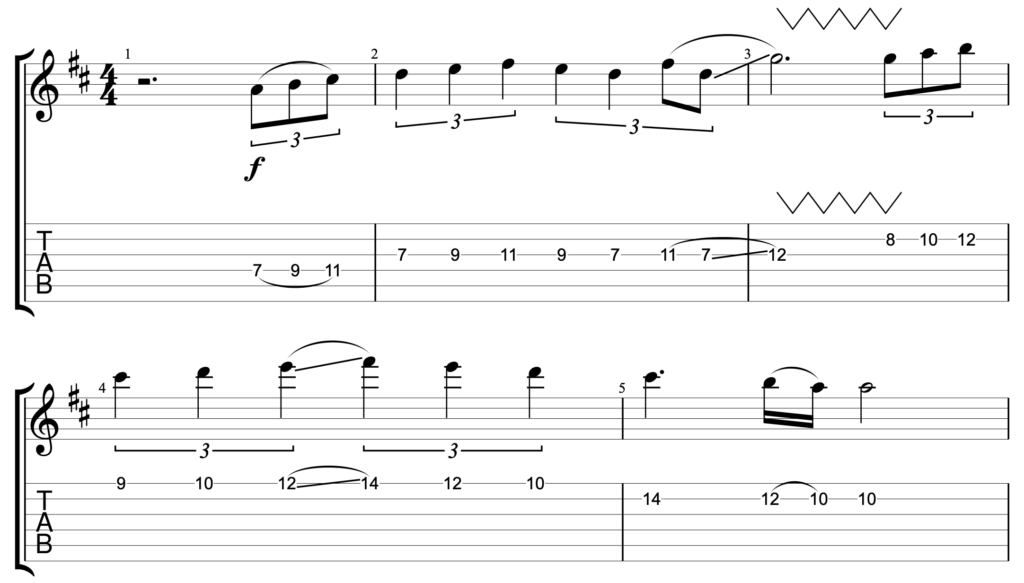 Since the pitch of the first voice is considerably higher, I prefer to put a third below it. That’s it.

In the tapping part, I wasn’t so sure that a third fits, or rather I wanted to keep the cool tapping pattern and therefore remain a fifth below the first voice. 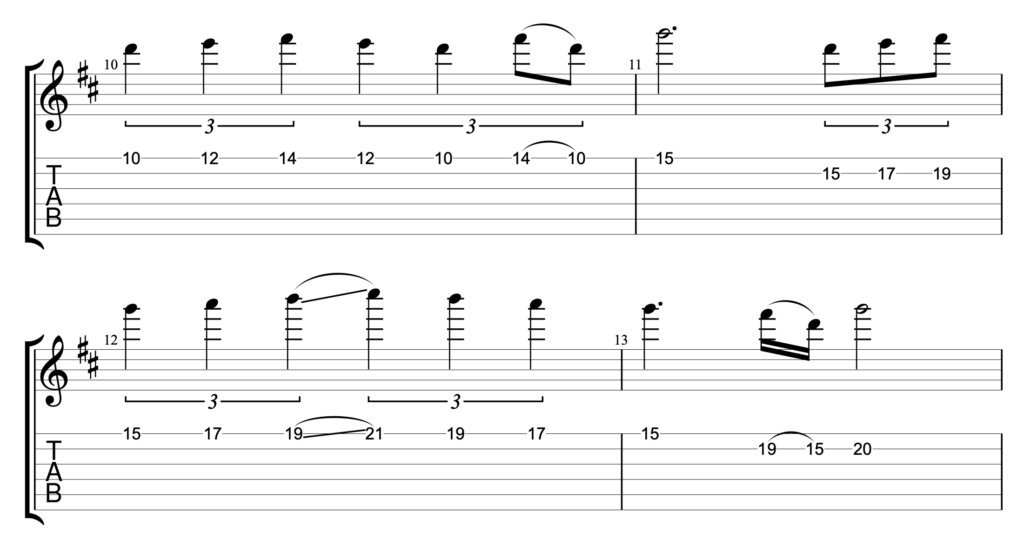 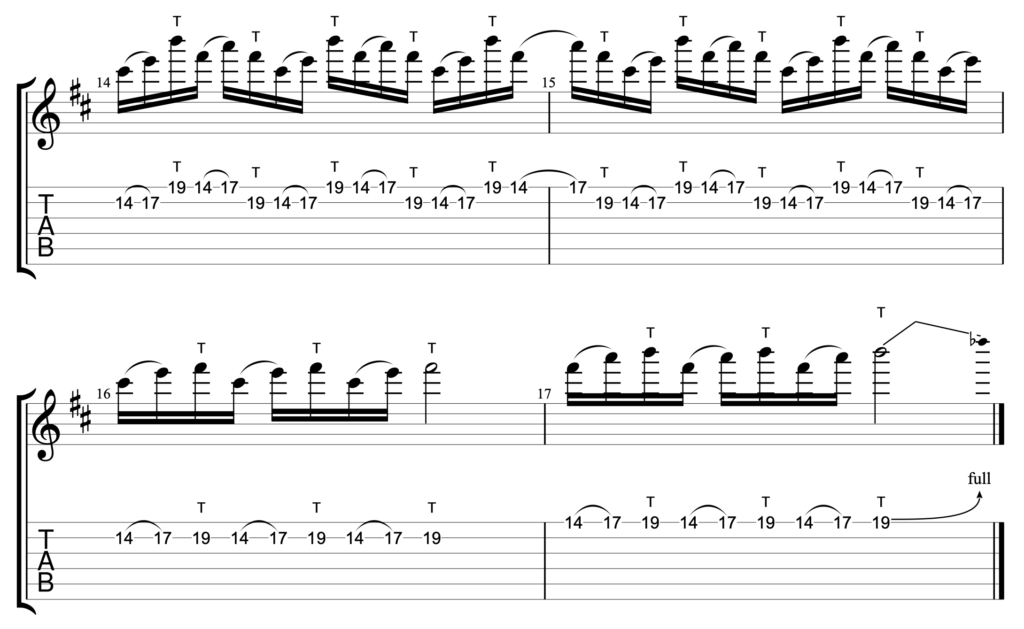 So, we’ve already had a fifth. What else is suitable for elegant harmonization?
Yup, exactly fourths will work, too! Listen to the old Scorpions classics. 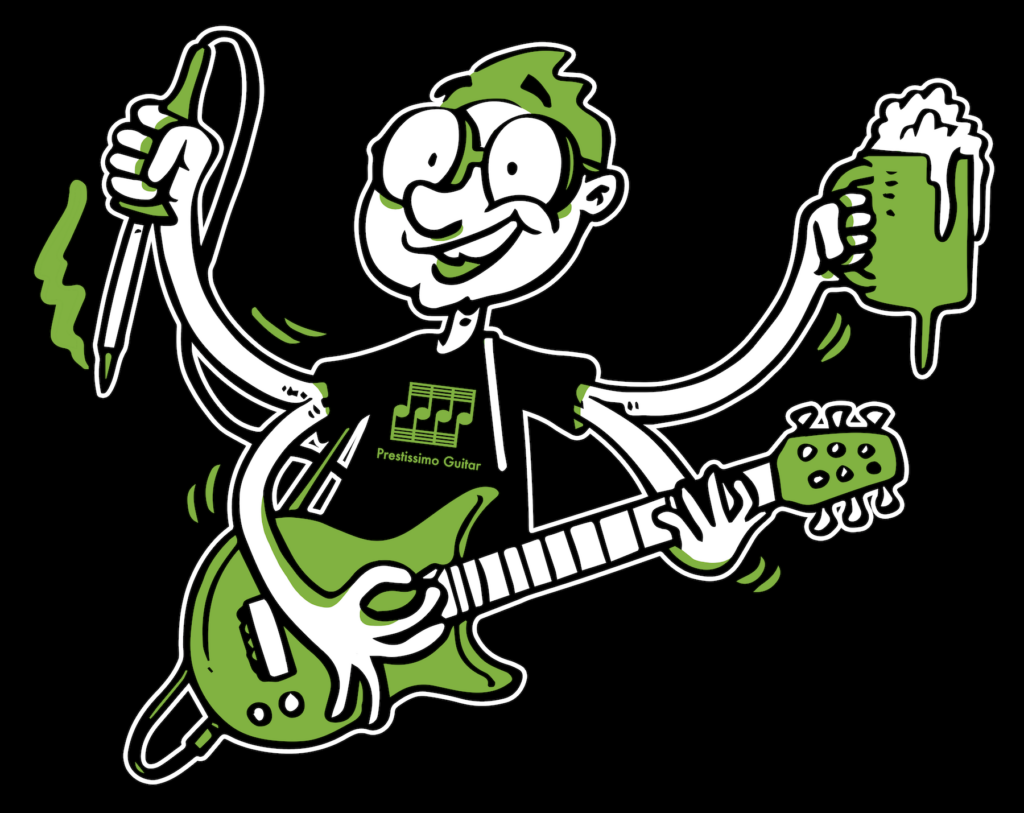 Here you find the overview of my book 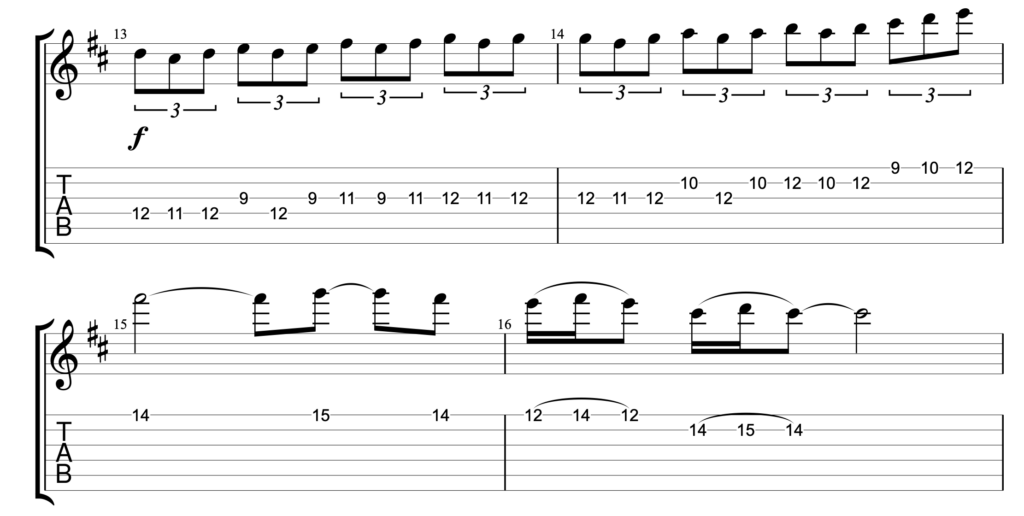 For the album version of Beyond the Veil, I’ve recorded a second voice in bars 13 to 16.

Of course, I don’t want to keep this from you:

Simply play the original motif a third higher. That’s it!

Meaning of the song

Everyone’s got a dream. So let’s dream big, dream on!

Okay, what’s happening? The chords of the accompaniment are as follows:

Three chords and good. That’s the way it has to be.
Quick analysis:

Let’s get to the solo on those chords.

I start off very comfortable with a fifth (F#) and the root of B minor and let it ring. You can do that confidently if the tone matches the chord, as in this case.

Then it continues comfortably. I play a G and bend it up to the A.

A is the major ninth to G major and at the same time already the third of the next chord F# minor.

So, I give a hint of the direction of the journey. I arrive in F# minor at the latest with the C# (fifth of F# minor) at count time 4.

More dynamics, please. How’s it going? In bar 5 it goes up (E-string 14th fret),
in bar 7 I add eighth notes, so rhythmically denser.

It’s interesting that in bar 7 a D major sounds over G major.

Why does that work?

D is the fifth of G and A the major ninth, as mentioned earlier.

F# is the major seventh to G major, doesn’t sound so great normally.

But in this case, it’s not so bad, since F# comes on the count 1+ and is, therefore, a passing note.

Howdy! We tighten the noose: more eighths, string skipping, double stops, and syncopation.
Everything a guitar cowboy should be able to do.

Rhythmically even denser by bringing out the triplets.

The B minor scale now serves as the tone material.

But there are several minor scales, which one do you mean exactly?

Correct, we differentiate between:

Which one do I take now? I can’t decide, I fluctuate between natural and harmonic. They only differ in one tone, the A or A#.

At the beginning of a triplet run I take A# (harmonic minor) and then in bar 14 I take the A again.

Hell bend for leather! Bendings till you have to call the ambulance!

A nice Open String Lick prepares us for the final.

Now only a tiny run and a tasteful bending on our target tone C#. Voilà!