Surely you still remember how the strings of your guitar are tuned, right?
Exactly: E – A – D – G – B – E, from top to bottom, from low to high.

This is called the standard tuning.

Tuning is how the strings of a guitar are tuned and tunings in general are the variation / deviation from the standard tuning.

Why do you do that? Why change the standard tuning?

There are a lot of reasons for that:

Because you can tune every string to 12 different notes independently you could end up with 12^6 = 2,985,984 different tunings. Whosh!

But are they all useful? I guess not! So I will walk You through some basic alternate tunings which have practical use.

First, a small picture for the overview 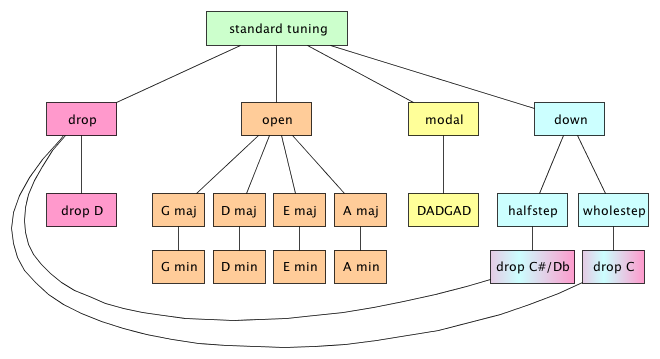 I roughly divide the tunings according to which or how many strings are tuned differently to standard tuning.

If you are new to tunings, start with a drop tuning: Usually the low E-string is tuned a whole step down to D, which is then called Drop-D:

An advantage of this tuning is that you can grab power chords with just one finger, because the lower open strings D – A – D already represent the D – powerchord.
You can now change the powerchords extremely fast. This tuning became popular with the advent of NuMetal but has been used since the Beatles.

Songs which use Drop-D

Just some of my favorites

In an open-tuning, all empty strings played together already form a chord, so you can put the finger on a chord or a bottleneck over all strings and move the chord around.
In an open-tuning you primarily have to decide, if you want to hear a minor or major chord.

When your guitar is already in Drop-D you can alter the lower three strings to get to Open D major: turn the g string to f#, the b string to a and the high e string to d.

Some other open tunings

A short list of my favorite Bottlenecks (Thomann Affiliate Links)

Out of all modal tunings especially the DADGAD should be emphasized. Not least because Led Zeppelin’s Kashmir is played in this tuning and had the true commercial success with the cover version “Come with me” by Puff Daddy.

As down tuning, I refer to tunings where all strings are tuned down by the same number of semitones. Most common in rock and heavy metal are down tunings by a semitone step

One good example are Guns’n’Roses, they’ve used this tuning all over their songs since their debut Appetite for Destruction.

In harder / modern styles of the metal, e.g. metalcore  guitars are tuned down by a whole tone or even more.

You can of course always add a dropped E string to your down tuned guitar as well.

At Excess Pressure we use to tune down a half tone to Eb/D# and drop the Eb to a Db/C#. You can call this Drop-C#

It is highly recommend to use heavier strings when tuning down that much.

I’ve used the D’addario EXL117 on my six string guitar for a Drop-B tuning.

and leave out the high e string.

If you want to go even deeper, buy a 7-string guitar or pick up a baritone guitar, as the deepest string is already tuned to H or A

But again you can tune or drop down again 🙂

I’ve found a nice website where you can search what song was played in which tuning: Guitar Tuning Database