The feeling of a Saturday evening after an exhausting work week when you finally can relax.
This one is inspired by Joe “Satch” Satriani. If you know Satriani, you know that his playing style consists of singable melodies and that he uses a lot of legato.

Let’s listen to the track:

Uhm, what tonality is that? If we look at the first six chords we got a very distinct B minor.

With G# major and the D# major we leave B major for a short period of time.

Because only the thirds are different from G# minor and D# minor we ignore that.

The chord progression is played three times so we have three rounds to solo along to.

Let’s get down to the nitty gritty:

First of all, the time signature is not 4/4 but 12/8. This is what is called a rock ballad, but you can think of it as a normal 4/4, except that the eighths are now played all triplet. Si claro!

Then: Without a motif a solo is nothing! After an offbeat (you know I can not do without) I play a motif with the target notes B (12th fret b-string) and F# (11th fret g-string).

Now to get smoothly into G# minor, I take the fifth D# on beat 1 bar 3; B as the fifth fits onto the E major chord as well.

Yes, and because I like it so much, I also add the fifth C# of F# major in bar 4, plus a perfect fourth (B) and major third A#.
Fifth G# for C# minor. Regarding the notes a bit boring, but the rhythm and the phrasing make the difference, everything slightly syncopated, you know. 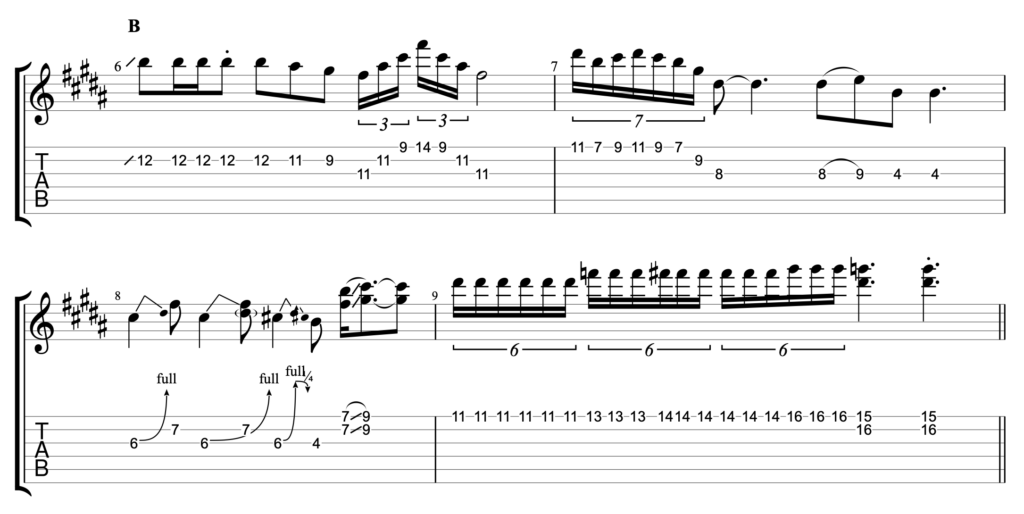 In the second round I had to get rid of something. I repeat my theme, but accelerate rhythmically.
For example, I play not only the F# on beat three in bar 6, but a full arpeggio in the basic position,
beautifully swept, ascending and descending once.

With the D# I’m the same way, leading in with a nice legato from above. Here you can already see that sometimes you just have to feel the rhythm. I was quite astonished when I saw that I played a septuplet. Fat! The rest of the bar is rather unspectacular.

Then with a few fluffy bendings and doublestops the theme is garnished in the eighth beat. In the ninth beat I unleash tremolo picking again. 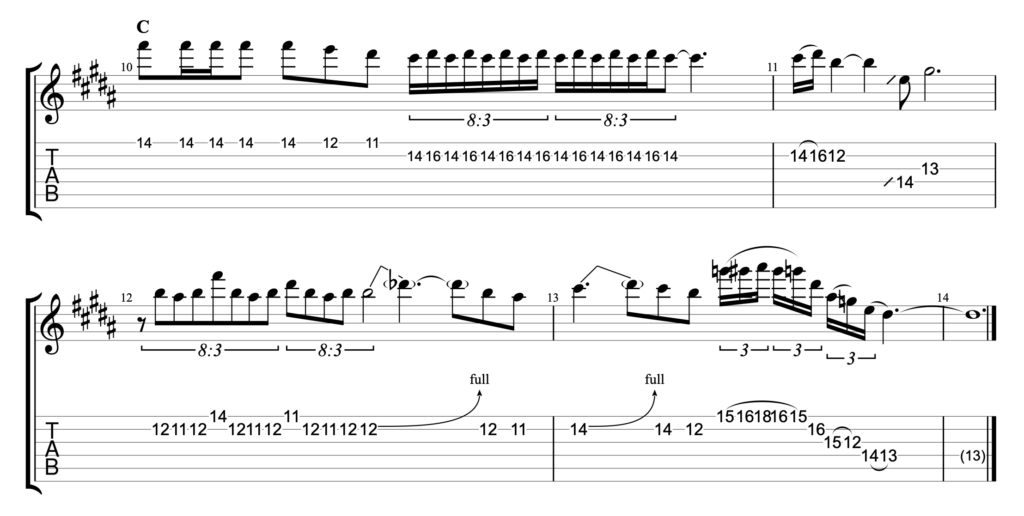 Ok, now the final sprint, home straight, give everything again! The theme is repeated a fifth higher this time, so we are now landing on the root C# with a creamy tremolo-HammerOn-PullOff-thingy. Again, absolutely funky to transcribe that …

Then the minor third B of G# minor and major third G# of E major.

Phew, the run in bar 12 is totally against the basic rhythm of the 12/8 time, but since I’m back again in C# at the end, no problemo. Go crazy – sometimes!

Bendings always do well, but need to be done accurately.

In the last bar I bend nicely into the fifth D# of G# major, then finally a nice D# major arpeggio with a tasteful landing on D#, which anticipates the fifth of the following B major.