André Hofmann is the owner of the Hofmann Studios in Coburg and mainly serves the fans of the harder music genres.

Here are his tips on “recording guitars at home”. Have fun with it!

So folks, here are a few words on my part on the subject of guitar recording.

Just to be clear: The following tips are just some tips from my experience which make your life (and my life as well) easier.

They are not the holy grail or “my way or the highway” kind of tips.

If those tips don’t work for you, ignore them.

You find a better approach? Go for it!

If possible, create a preset for the input gain for each guitar you use.

This is intended to prevent excessive volume differences between the clean tracks of the individual guitars.

Recording should be done in 24 bit resolution and all tracks mono should be mono.

The sample rate should be set to 48kHz. If your interface can only do 44,1kHz that’s fine too. 48kHz is better for syncing with videos later on.

Higher sample rates like 96kHz or above should only be used when excessive time stretching or pitch shifting is needed.

Important: If someone else will be working with your tracks somewhere down the line (not the entire mix), you should check with them first what kind of format they prefer and usually work with.

If you want to double (i.e. always 2 guitar tracks directly on top of each other) please note the following:

Mantra here: it is better to have parts and takes which in the end do not appear in the mix, than to have to record additional parts late in the project.

Lay out your project accordingly from the beginning, i.e. create 4 rhythm tracks, two of which are defined as right, two as left, two lead tracks, two solo tracks (the second only if necessary) 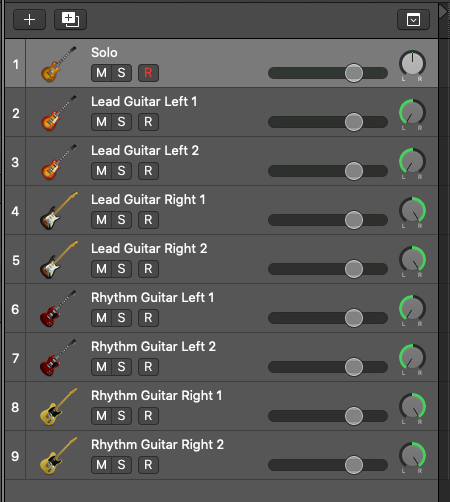 Basically, it is advisable to play part by part. Not too much in one go.
Longer parts often lead to more repetition to nail them down perfectly.
But make sure that you have some kind of overlap between the individual parts to preserve the same timing and feeling. That makes it easier to stitch the parts together.
Caveat: If the parts get too small, the effort for the engineer will over-proportionally increase with the number of parts you have to handle. Also your tracks will sound increasingly robotic the smaller the parts get.
You want to avoid sounding like a midi track blasting through a guitar amplifier 🙂

To get a cleaner tone when you are not using open strings you can try a string dampener.
You can also dampen the strings that are not played with a handkerchief for each part.
So it is easier to concentrate on your part. And you don’t have to repeat a rather good take only due to some string noise.
And no, it’s not considered cheating. Even Matt Heafy from Trivium has his own signature FretWrap 🙂

Furthermore, the guitars should not be switched between related parts.
I.e. (an ideal case example)
The two rhythm guitar tracks for the left side are played completely with one guitar, the two rhythm guitars on the right string are played completely with another guitar.
Exceptions to this ideal case are OK, but if you can avoid it, all the better.
In principle, it doesn’t matter which guitars it is. In any case, tracks that will later be on top of each other MUST be played with the same guitar by the same person!

Is it too difficult to double?
If doubling is causing you too much trouble, only make one rhythm track per side. Everything else should stay that way.

If the left and right tracks are being played by different people, please also check whether they are in harmony in terms of timing. If they diverge too much, that sounds rather ugly in context.
In such cases it is advisable to have one person play both sides. You still harmonize best with yourself. 😉

Before you record, check the fret intonation and also tune regularly.

… is allowed if it harmonizes with the drums.
But please don’t put the copied parts directly behind each other.
If timing problems arise, it is better to play the relevant part separately.
To lighten things up a bit you can copy across the panorama so that actually nothing is repeated directly.

Take your TIME and don’t stress yourself. Not working calmly, focused and purposefully with such tasks usually leads to brown, fecal-like results.